After putting Gonzo (2014) on the internet for anyone to freely enjoy, Foxy Shazam took the album on tour, treating the East Coast to a double Foxy feature: First half Gonzo, second half old Foxy. While on tour, Foxy also released a stylized music video for the song “Tragic Thrill.” This video visually accomplished just as the album sonically did, “it feels cohesive but unlike anything else,” explains front-man Eric Nally.

Unlike the music videos for “I Like It” and “Holy Touch” from The Church of Rock and Roll (2012) that portray the wild, colorful side of the band, “Tragic Thrill” illustrates a muted version of Foxy that we have never seen. The video explores a whole new dramatic side of Foxy, showing that theatrics come in all forms and that Foxy Shazam can pull off all of them. Nally says, “I wanted to bring an energy to our video that we haven’t done before. I wanted the energy to be in the music, not necessarily in the performance.” The majority of the video shows all of the members bathed in a purple hue, performing the song in an understated manor. Nally doesn’t even have a microphone. The Foxy front-man continues, “It’s still theatrical. It’s just a different approach. I’m proud of ourselves for nailing that. Naturally, we wanna jump around and head bang and rip our shirts off, but in this one we wanted to pull off this mood. It probably took more energy than ever to do this video.” They certainly nail it.

Substream Magazine: For your “Tragic Thrill” video, what made you decide to use color the way that you did?

Eric Nally: The director and I were talking about it and the inspiration about the pink hue thing is based on some of the first Star Trek movies. They would go to a different planet like Mars and hue the whole scene red, for example. They’d land on a new planet and everything would be red. It kind of feels like a different dimension.

SM: What’s with the cutaway to the cucumber?

EN: I had this vision of that in my head for some weird reason. After watching it over and over I realized what that meant to me and why it was knocking on my brain. I think it’s phallic. It’s a fuck you to the man that says, ‘We can do whatever we want for no reason at all.”

SM: Do you have another music video in the works?

EN: I think we’re going to do “Don’t Give In” next and I have a few ideas, but I don’t want to give them away.

Foxy Shazam always does the unexpected. Whether through their songs, videos, or live performances. The Gonzo Tour has a healthy dose of both old and new Foxy. Old fans can get their fix of all things absurd during the second half of the show while also experiencing the band’s new dynamic during the first half. Foxy will be taking the tour to the West Coast where the other half of the country can finally enjoy the can’t-miss act.

SM: Let’s talk about Gonzo’s album art. What inspired that?

EN: Daisy has this sketch that he did on a post it note while we were in the studio. He had this dream that clouds were shitting on him and he drew this city with those butt clouds. Those clouds really burned into my mind, so I took that image and made a pattern with it across the whole cover. It felt right. I’ve never seen anything like it and regardless of how weird it is, it stands for what we did. It has style, you know? It’s definitely Gonzo.

SM: How did the East Coast portion of the Gonzo Tour go?

EN: It’s been our most successful tour yet. I feel like we’re finally in the size club that we should be. The turnout has been amazing and the reception of playing the record live from fans has been great. It’s really exciting. I feel like this album belongs on the stage. When you see it live, there’s not that big of a difference between Church of Rock and Roll and Gonzo.

SM: There have been some mixed reactions about your new sound, are you seeing a lot of old fans or new fans coming out to the shows?

EN: I think it’s a little bit of both. We still definitely have everyone that has followed the band before, but there’s people coming out I haven’t seen for a long time who were more fans of the older stuff. It’s a really eclectic crowd, which is great. Gonzo kind of weeded out the kinds of fans we don’t really want anyway. If you don’t get what we’re doing… the people who are coming to the shows are there for the right reasons.

SM: Daisy plays bass in this album while the bassist plays guitar. Has the switch in the lineup translated well to the stage?

EN: We were wondering how we would pull it off live, but we basically do the whole Gonzo album first and then we go off stage, switch out the instruments and come back and play the old stuff. It’s really been going smooth and it adds an interesting dynamic to the show, I think.

SM: Is there a song from Gonzo that audiences seem to dig more than the others?

EN: I think people get really into “Brutal Truth.” To be honest, when we play Gonzo, I see people’s faces just taking it in. They’re standing there… hooked.

Foxy Shazam starts their West Coast tour July 26, then they end the summer touring down South. Put on your best pair of kicks and make it out to see the Gonzo Tour when it comes to your area. 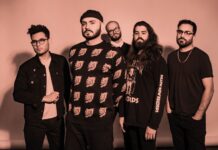 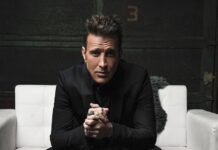 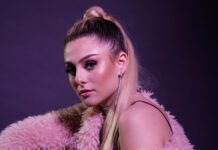