Two years after proving that nearly forgotten television series can be turned into a box office champion, filmmakers Phil Lord and Christopher Miller have once again struck comedic gold with 22 Jump Street.

Jenko and Schmidt are the same fun-loving, somewhat absent minded best friends we found in 21 Jump Street when their latest adventure begins. Deputy Chief Hardy (Nick Offerman) informs our heroes that no one expected the reboot of Jump Street to work, but because their first case was such a success the department has decided to double their budget and give them another assignment, as if doubling the money put into something somehow guaranteed double the return. He also expresses a fear that their friendship will go sour, leading to trouble with the case that will not be resolved until they can overcome whatever emotional hurdles the face. Without hesitation, Jenko and Schmidt accept.

Reporting to their Jump Street offices, which have been moved across the street from their previous address, Jenko and Schmidt arrive on site to discover Ice Cube and the nerds from the first film waiting to tell them about a drug situation developing on a nearby campus. The pair are tasked with going undercover as students and finding the source of the product, who may or may not have been involved in the recent death of a student. It’s almost exactly what they were asked to do last time, and the department has asked Ice Cube to stress that they want the duo to do the exact same thing. Why fix something that isn’t broken, right?

At first, college is everything Jenko and Schmidt could have hoped it would be. They’re finally on assignment again, they’re living together, and for the first time in both their lives they are able to receive a higher education. It does not take long, however, for things to go awry. Jenko finds his calling in football, while Schmidt becomes infatuated with a beautiful girl. New friendships emerge, as does jealously, and soon solving the case at hand is one of the smallest problems facing Jenko and Schmidt.

Audiences who loved the original outing of 21 Jump Street will find plenty to love here, but that is not to say that 22 is not an original story in its own right. On the contrary, the core story elements may purposely be exactly the same as the last film, but the way they’re handled and the strange occurrences that develop over the course of Jenko and Schmidt’s investigation are wholly unique to this film. That’s part of the magic behind why the final product is so profusely hilarious. You know it has been done before, as do the characters in the film, and because of that fact there is a seemingly endless amount of double entendres and 4th wall shattering humor to be enjoyed.

Also, there is something incredibly refreshing about walking into a sequel that features two main characters who already know and love each other, not to mention work together, from the beginning. You know there will probably be some dramatic tension at some point, but there is no prelude to the story you paid to see. 22 Jump Street begins with an action sequence, as all great sequels do, and then jumps straight into its central story. The pacing throughout is great, and a lot of that is owed to the fact the audience is already familiar with 90% of the characters on screen. The exposition you would typically find filling stories to explain characters and their motivations are replaced here with more jokes, which it seems safe to say all audiences prefer.

From the very beginning of the 22 Jump Street it’s a meta approach to comedic storytelling that serves as the backbone for every joke and plot twist that takes places over the course of the film’s 112-minute runtime. The razor sharp dialogue skills Phil Lord and Chris Miller first showcased in 2012 have only been refined in time and that fact, coupled with the undeniable chemistry of the film’s, makes 22 Jump Street a powerful comedic force in the current film market. It may be the funniest film of 2014, but if not it’s certainly going to be within the top 3, likely only topped by another project Lord and Miller have developed. 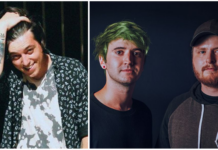