They say the third time something occurs it is often a charm, but with Blended it feels much more like a curse.

Adam Sandler and Drew Barrymore pulled off something akin to winning the lottery twice when Fifty First Dates became a box office success. For the first time in many years, a romantic on screen pairing had made two entirely unrelated films in the same genre and won over fans worldwide. It did not matter that there was not a giant ‘2’ at the end of the second film’s title because the chemistry between the two, not to mention the premise of the film itself, appealed to audiences. It’s a feat so rare, in fact, that no other pair in Hollywood have pulled off the same accomplishment since.

Blended, which opens this weekend, reunites Barrymore and Sandler for a third – and please dear god let it be the last – RomCom themed adventure. This time around, both leads are single parents with kids they’re struggling to stay connected to and jobs that neither find all that fulfilling. Sandler’s daughters miss their deceased mom and Barrymore’s sons grow more and more protective of their mother by the day. The two parents cross paths early on thanks to a blind date, but sparks do not fly on account of neither giving the other an honest chance to win them over. Little do they know, the foibles of life will soon find both of them, as well as their children, sharing a lavish hotel room on an African vacation. Don’t worry, you (the viewer) get to go too, though you may leave wishing you never even packed in the first place.

As soon as Blended informs viewers that Barrymore and Sandler’s characters do not initially like one another the film essentially stops worrying about plot development altogether. The only real issue needing to be resolved throughout the entirety of the film’s 117 minute runtime is whether or not the two leads will realize they have a lot more in common than they initially thought. The audience knows they have chemistry almost immediately, as do the pair’s children, but for whatever reason the film forces viewers to sit through a tedious and lazy ‘will they / won’t they’ game that plays out for about an hour too long.

In an attempt to pad the razor thin plot with extra chuckles and entertainment, Blended manages to make Kevin Nealon and Terry Crews come across as celebrities just as money hungry as the leads by giving them plenty of screen time, but absolutely nothing witty to add to proceedings. Crews may be the biggest waste of all, filling in as an overly enthusiastic band leader who just-so-happens to be present for every major event during the family’s trip with on-the-nose songs to recap what audiences just witness. When something silly happens, the group sings a silly song. Etc. Etc. Etc. It’s a worthwhile idea, but the execution leaves a lot to be desired.

From start to finish, Blended never once attempts anything resembling a sense of originality beyond setting the majority of its story in Africa. Even then, the beautiful landscape of the continent and the people who inhabit it are never embraced in any kind of meaningful way. There are a grand total of two sequences that take place outside the hotel, and one of them is a montage of safari tour scenes that feature more CGI animals than real ones. The other, involving Barrymore and and all too brief attempt at parasailing, offers momentary glimpses of the countryside in between moments of bad dialogue and schtick.

Blended confirms your worst fears about Adam Sandler’s willingness to create almost anything as long as it allows him a nice vacation while simultaneously soiling Drew Barrymore’s reputation for no good reason whatsoever. Every minute that passes while watching this film is another minute of your life wasted on lazy entertainment made by people who apparently think very little about their audience or the quality of their work. It may not be the worst film of the year, but it’s definitely the worst summer release audiences have encountered thus far in 2014. 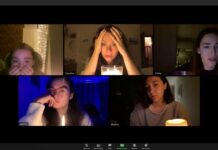