In today’s over-saturated music industry, bands have to stand out from the crowd, be that a unique sound, an interesting back story or a cool gimmick.  Electro-pop powerhouses Five Knives, has all of these.  In just over a year, this group hailing from Nashville Tennessee, has already signed a record deal with Redbull Records and have toured the country with big names, including the Smashing Pumpkins and Die Antwoord.  We caught up with Nathan Barlowe (keyboard/guitar) to find out what they’ve been up to and what they’ve got in store for us. Check @Substream on Instagram for your chance to win some merch from Five Knives!

Substream Magazine: You’re on tour right now with Twenty One Pilots.  What are some interesting things that have happened with all of the bands on tour?

Nathan Barlowe: Well we’ve only done one leg so far, so it’s only been a few shows. So it’s all pretty brand new, so we’re still sort of, I mean, going on tour with someone is sort of like dating, so you don’t just jump in and start hanging out right away.  So we haven’t really spent a ton of time around them, you know. Plus our band likes to go out every night, and they don’t really go out. But they’re nice dudes. I mean they’ve been really nice to us.  I will tell you the band New Politics, the middle band, um we’ve struck up a friendship with them and we’ve definitely been tearing up the town with them, and we had a hula hoop contest, uh, dance-off party at a club the other night.

So when this tour is over you guys go straight to Warped Tour?

NB: We have about a month off, and on June 15th we start Warped Tour, and that ends in August.

SM: So what do you have planned for the month off?

NB: Well it’s not really a month off because we have to finish our record. So we’re gonna be finishing our record, mixing it and getting it ready to go so that it can be released in the fall.  So it’s really not time off, it’s just time off the road.  So we’ll be in the studio working.

SM: So what can we expect from this new record.

NB: Well it’s our first release so you know we’re, like, just trying to make sure all the songs are great and that, um, you know this band, it’s all happened so fast. We’ve only been together a little over a year, and things happened really rapidly for us.  It’s you know, it was all kind of a big accident too, because my friend Zach, who’s the other keyboard player in the band, he and I wrote some songs, and we weren’t trying to start a band.  We were just trying to put it online to have fun.   We brought Anna, the singer, in on it, and everybody started freaking out and saying ‘You guys need to be a band.  You need to start this.’ So it’s all been so quick and unexpected so I think, like, for us the main thing is just to make sure the songs are incredible, so hopefully you can expect amazing songs.

SM: Let’s talk a little about Warped Tour.  What are you most excited and least excited about on this tour?

NB: That’s a good question. I’m most excited, I think we’re all most excited about, it’ll be the first time on a tour bus.  So having our own bus is amazing because we drive ourselves in a van. We have to play shows, I mean, a lot of bands do this. I’m not complaining, but you play a show, and then you pack your own gear up, and then you get in  a van and you drive to the next city, and you’re just exhausted all the time.  So I’m excited about actually getting to sleep after a show, not having to drive ourselves. So the tour bus I think is what everybody is most excited about.  And the thing we’re not excited about is all the shows are outside, and it’s the middle of summer, and I think we hit Florida around the middle of July. I’ve heard from all our friends that have been on this tour that it’s just brutal on you just playing outdoors every day.

SM: How are you guys going to prepare for that?

NB: You know what, I don’t know. One thing we’re discussing right now is we wear hoods and masks in the first part of our show.  Always since we’ve started that’s what we’ve done, and we’re like, ‘How the hell are we gonna do that this summer.  Are we gonna pass out?” (Chuckles) The main problem with being in a band that wears all black, it’s like how do you continue, you know, how can you be dark and mysterious when it’s a thousand degrees outside. So I think the challenge will be dressing cool even though you’re burning up.

SM: Is the all black thing who you guys are or is that sort of the branding that you have done for the band?

NB: Well, I mean, for a couple of us it’s like our daily what we’ve always worn anyway.  For me that’s just how I dress anyway.  Zach the other keyboard player is really into hip hop and he tends to dress, when we’re not on stage, he leans a little more towards hip hop style fashion wise.  I don’t think he wouldn’t wear like a Black Flag shirt like I would. I think it’s what makes our music so different.  We are blending like Punk Rock, Hip Hop and Electronic, and that’s because that’s what we’re all actually from.  But yeah, I like to have a uniform look as far as how the Ramones did it and bands that I love and think are so badass.

How did you guys get started with the masks and the hoods?

NB: Well that all happened because we were in different bands when we started.  We started this as sort of a fun side thing, like I said, it wasn’t even that serious.  But we didn’t want people to really judge us on the bands that we were in previously. So the whole idea of that was to originally just wear them in our hometown. Because honestly, we didn’t even think we would get big enough to get out of our hometown. So we would do basement parties, and you had to have a secret password to get in, and then when you got in you didn’t know who was in the band because at that time we used to keep the masks on the whole show. So there was this awesome kind of buildup of confusion and people talking and rumors and sayings around town to fuel the hype for the band. So, um, that’s the reason we originally started it.

SM: What made you guys decide to identify yourselves?

NB: Well, I mean, you sign a record deal and they want your face to be seen. The one fear of mine was, I didn’t want to be a, like, Daft Punk or a Slipknot type thing where that was your identity, and you have to stick to this one mask your entire career, because that wasn’t originally what they were intended for anyway.  And word started to get out, you know, who we really were so it was just kind of, we still use it as an aesthetic, more of like an artistic art piece. Like we’ll take photos, and we’ll wear different ones, I mean, we don’t wear the same one every night. We’ll just wear them a couple songs and then we’ll take them off.  A lot of that is just comfort. But the reason we started out, I mean, it served its purpose for us just trying to hide our identity in the beginning.

SM: What is one thing about the band that nobody knows yet that maybe you have always wanted them to know?

NB: Oh man that put me on the spot.

NB: (Laughs). SO the one thing about the band that no one knows.  Hmm, well ok, it’s not that I want people to know this, I don’t really care, but every night before shows we listen to hardcore hip hop in the dressing room and dance like idiots. That’s like our pump up.

SM: That’s awesome. How did that get started?

NB: Uh, you know, it was like one of those things where it was an accidental thing at first, and then we were on the Smashing Pumpkins Tour when it started. So that’s why, we had a great show that night and then we became superstitious about it, like we have to hear this same song every night before we go out.

NB: It’s, um, “Fuckin Problems” by ASAP Rocky. (Laughs.) And we listen to it every single night before every show.

SM: Nice. Are you guys going to continue that forever you think or switch up songs maybe?

NB: Well, we may switch up the songs but right now the good luck’s on it.  Like baseball players wearing the same socks, we don’t wanna screw it up. It’s going well.

SM: You said you guys dance.  Who’s the best dancer?

NB: Uh, I think Zach definitely, the keyboard player Zach.  He’s got like so much ghetto in him (laughing).

SM: Is there anything else you wanna say?

NB: Um, come see us live.  We’ll be on Warped Tour, and I think this fall we’ll be doing another tour in the US but we’re going to Europe as well.

Check @Substream on Instagram for your chance to win some merch from Five Knives! 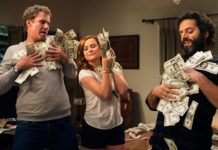